The Edith Falls are a series of cascading waterfalls and pools in the Edith River in the Nitmiluk National Park, which also encompasses the famous Katherine Gorge. They are located approximately 60 Kms north of Katherine and 300 Kms south of Darwin.

The falls descend from an elevation of 176 metres (577 ft) and range in height between 8.7–12 metres (29–39 ft). There are trails to the top of the escarpment, allowing visitors to view the waterfalls. Edith Falls is connected to the Katherine Gorge via the 66 Km Jatbula walk. The traditional custodians of the land surrounding the waterfall are the Jawoyn people.

We stay at the beautiful National Park campsite for 2 nights, taking advantage of the opportunity to swim in the crystal clear waters.

Elsey is a National Park east of Mataranka and 380 Kms south of Darwin. Mataranka is the home of the Mataranka Falls and the Mataranka Thermal Pools, which are home to a well known colony of the little red fruit-bat. We take advantage of the thermal pools for a dip in bath-temperature and beautifully clear water. The hot springs generate over 30 million litres of fresh water every day.

Many times on our travels we have to stop at roadhouses which are normally combinations of fuel stops, fast food outlets, shops, camp sites, toilets and showers. They are normally situated at the extremes of your fuel capacity and, hence, tend to charge whatever they like for their fuel. Here is an interesting take on this situation – a notice issued by one such roadhouse.

Definition of madness – a gentleman riding a bicycle from Alice Springs to Darwin (a distance of 1,500 Kms) in 30 plus degrees heat and carrying everything he needs with him. We have now seen this guy about 4 times.

A regular stopover for us is the Daly Waters Pub on the Stuart Highway about 600 Kms south of Darwin. It has a caravan park, great pub food, fantastic entertainment, cold beer and … lots of pairs of knickers and bras stapled to the walls and ceiling.

We stay for the entertainment which involves an old codger singing (badly) with a live chicken sitting on his head – true – see photo. Finally, photographic evidence is supplied of Siobhan on the dance floor in the outback.

On the way to Bank Banka (see below) we overnight at a free camp at a place called 41 Mile Bore. This is literally in the middle of the outback but we weren’t alone as several other travelers also stopped here for the night.

All was going swimmingly until Bob got back into the caravan after Siobhan and closed the door. Now … the caravan door has always been a little sticky so a slightly more forceful tug is required to ensure the door closes properly. However, the sound of the door closing was followed immediately by the sound of the internal door handle disintegrating in Bob’s hand. Followed in a millisecond by the expected expletives as the realisation dawned that the only way the door can be opened from the inside is by using the (now defunct) door handle.

Bob’s dormant claustrophobia suddenly raised its ugly head. Just before the absolute panic stage, we realised that there was still a small piece of the handle still in place which we managed to manipulate to get the door open. So the overnight fix involved two elastic bungy cords tied together.

The next morning we were trying to work out how to get this problem fixed in the middle of nowhere. Once outside the caravan we could close the door but the bungy cords were required if we were inside.

To cut an already long story short, once we got into telephone reception we called a caravan park in Tennant Creek to see if they knew of any caravan repairers only to be told that a mobile repairer was stayed there the previous night but they had left that day. I called his number to see where he was only to be told he was pulling in to the roadhouse we had stopped in to call him, 5 minutes behind us !! He looked at the problem, we waited with baited breath as he dug into the back of his van and ….. found the very same handle that we broke the night before. Same size, same colour, same orientation … How lucky were we.

Banka Banka Station is a 100 Kms north of Tenant Creek on the Stuart Highway north towards Darwin. The historic cattle station was the first operational pastoral lease in this region, and a supply camp during World War II, providing meat, eggs, fruits and vegetables. It was occupied and run by the Ward family and is still the site of a mud-brick homestead.

There is plenty of water here and the caravan and Landcruiser get a much needed wash. We also take the opportunity to change our water filters – take a look at the difference between old and new (pic middle bottom below)

Our last overnight free camp before we hit the Northern Territory is at the Drover’s Camp just outside Camooweal. There is plenty of water in the billabong and the bird life is amazing. 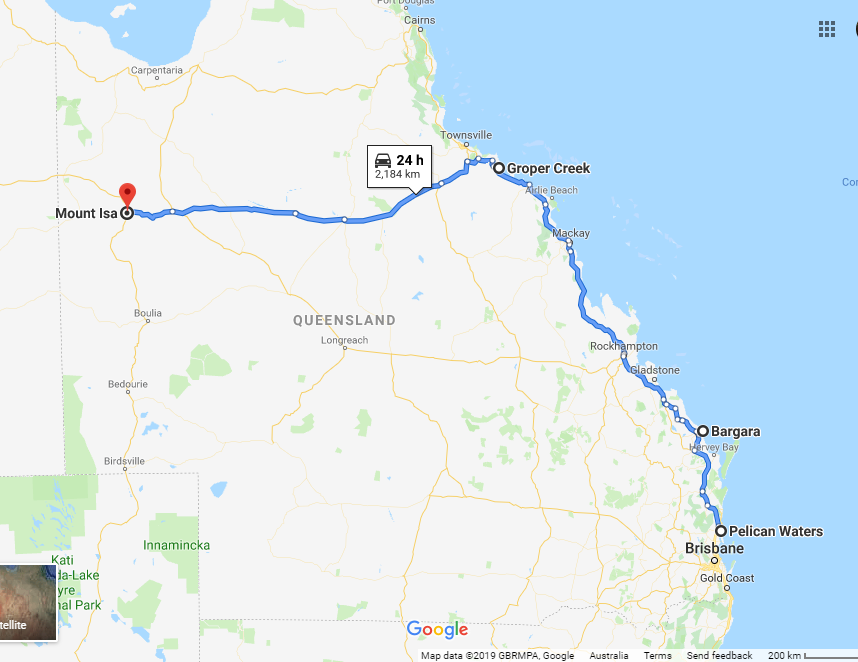