Razorfish are a shellfish, or a marine bivalve mollusc to be correct, that live in the sand and mud flats in tidal areas in Southern Australia. They are a large, fan shaped shellfish that lay buried in the sand point first. This leaves the large curved edge of the shell exposed. This edge is quite sharp and has been responsible for many cuts and scrapes of those collecting the shells. Hence the name.

A decade ago, razor fish could be found in numbers right along metropolitan coasts (in suitable habitat) as they were used by only a few fisherman as bait. Now, however, some areas are totally devoid of them now and this is due to the fact that their potential as an extremely tasty seafood dish has been realised.

The shells are fairly well embedded, so it is necessary to bend over, grab the shell and wiggle it from side to side, all the while pulling up.

Once you have collected enough shells, they have to be cracked open and the white “heart” of the fish removed. This is also hard work. The easiest method is to break each shell with the back of a meat cleaver then slip a thin but sturdy knife blade under the shell, keeping it as close to the underside of the shell as possible. If you are doing this correctly, the remains of the shell will open up easily. The insides surrounding the “heart” can then be removed which will leave just the white muscle still attached to one side of the shell. You should have a roughly round piece of white flesh. Depending on the size of the razor fish, this should be about 5 cm or 2 inches across.

Eaten raw, shallow fried, deep fried or grilled, this flesh is superb. Like scallops only tastier, razorfish, in our opinion, are at least rivals to prawns and calamari. The flesh is firm and white and, if cooked correctly, is tender.

Our favourite way to eat razorfish is to combine them with some finely sliced fresh squid, cook them for less than a minute with chili and garlic and add them to a fine spaghetti … yummy. 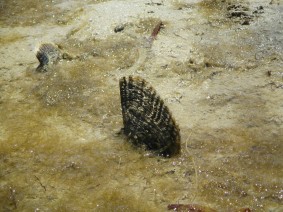 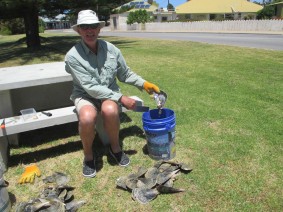 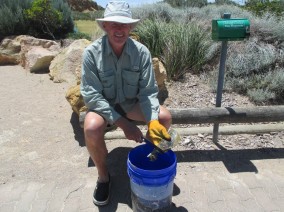 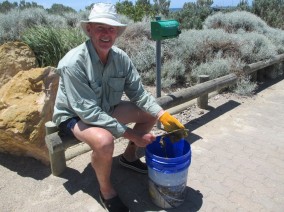 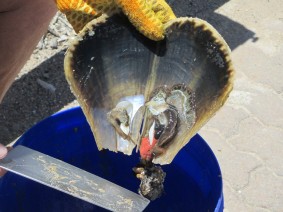