“Waltzing Matilda” is Australia’s best-known bush ballad and has been described as the country’s “unofficial national anthem”. The title was Australian slang for travelling on foot (waltzing) with one’s belongings in a “matilda” (swag) slung over one’s back. The song narrates the story of an itinerant worker (swagman),  making a drink of billy tea at a bush camp and capturing a stray jumbuck (sheep) to eat. When the jumbuck’s owner, a squatter (wealthy landowner) and three mounted policemen pursue the swagman for theft, he declares “You’ll never take me alive!” and commits suicide by drowning himself in a nearby billabong (watering hole), after which his ghost haunts the site.

The original lyrics were written in 1895 by Australian poet Banjo Patterson and were first published as sheet music in 1903. Extensive folklore surrounds the song and the process of its creation, to the extent that it has its own museum, the Waltzing Matilda Centre in Winton, where Paterson wrote the lyrics.

Banjo Patterson is also an award winning poet having penned such classics as The Man From Snowy River, Clancy Of The Overflow, A Bush Christening, plus many more.

The North Gregory Hotel holds an enactment of the first rendition of Waltzing Matilda plus readings of some of Banjo Patterson’s poems each evening at 5:30. 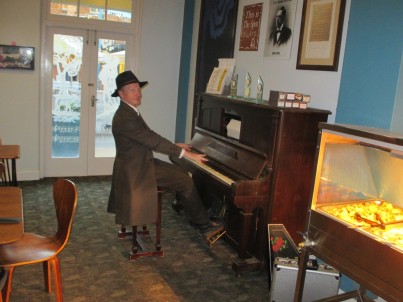