We camp behind the North Gregory Hotel in Winton for three nights to check out the dinosaur capital of Australia, so called because of the abundance of dinosaur fossils that have been found in the surrounding area – more of that later.

The Hotel only charges $10 per night with access to loos and showers but no electricity, which we do not require thanks to our solar panels.

Note from the photos that there is a slight fly issue here. Also, all the litter bins are shaped like dinosaur feet. Emus are quite a common sight around Winton. 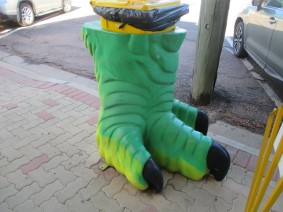 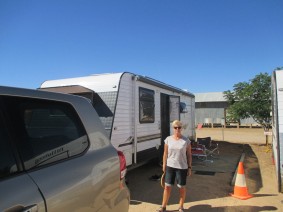 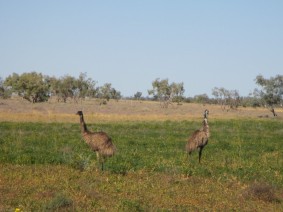 Winton has one quirky attraction – Arno’s Wall. A modern wonder of art and architecture, Arno Grotjahn’s wall contains almost every household item you can imagine and more. The walls reach two metres high and extend for at least 70 metres. They are constructed of concrete and rock brought from Arno’s opal mine at Opalton and studded with rusted lawnmower parts, boat propellers, vintage typewriters and sewing machines and even a couple of complete motorbikes.

Arno was born in 1930 and spent his youth as a merchant seaman travelling the world. He immigrated to Australia from Germany some 30 years ago and spends his time in and around Winton opal mining. 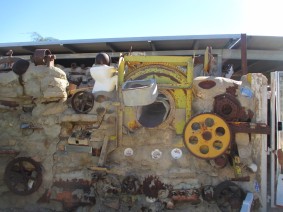 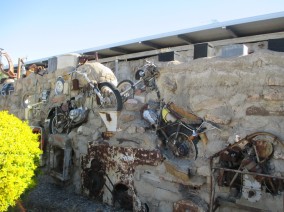